Leadership in the Community – Patricia Paradis 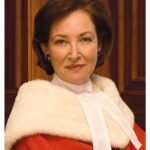 The Honorable Rosalie Silberman Abella was appointed to the Supreme Court of Canada in 2004 after serving on the Ontario Court of Appeal for 12 years. She practiced civil and criminal litigation until she was appointed to the Ontario Family Court in 1976. She subsequently chaired the Ontario Law Reform Commission and the Ontario Labour Relations Board. Justice Abella was the sole Commissioner and author of the 1984 Royal Commission on Equality in Employment, creating the term and concept of “employment equity.” She was the Boulton Visiting Professor at McGill Law School from 1988 to 1992, where she taught jurisprudence, administrative law, and constitutional law. She is a specially elected Fellow of the Royal Society of Canada and of the American Academy of Arts and Sciences, as well as a graduate of the Royal Conservatory of Music in classical piano. She was a judge of the Giller Literary Prize, has written over 90 articles, and authored or co-edited four books on a variety of legal topics. Justice Abella chaired the Rhodes Selection Committee for Ontario and is a graduate of the Royal Conservatory of Music in Classical Piano.

Justice Abella was awarded the Distinguished Alumnus Award of the University of Toronto Faculty of Law; the Distinguished Service Award of the Canadian Bar Association (Ontario); the International Justice Prize of the Peter Gruber Foundation; the Human Relations Award of the Canadian Council of Christians and Jews; the Honourable Walter S. Tarnopolsky Human Rights Award; the Bora Laskin Award for Distinguished Service in Labour Law; the Global Jurist of the Year from Northwestern Pritzker School of Law; the Ethical Leadership Award from the Faculty of Management at Dalhousie University; the Calgary Peace Prize from Mount Royal University; and the Goler T. Butcher Medal for International Human Rights from the American Society of International Law.  She has 38 honourary degrees.

She is married to Canadian history professor Irving Abella, with whom she has two sons, both lawyers. She is the first Jewish woman appointed to the Supreme Court of Canada.