Leadership in the Profession (In-House or Government) – Rebecca Brown 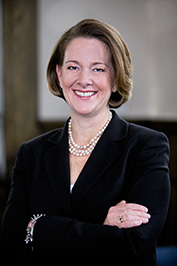 Alison Redford was the PC MLA for Calgary-Elbow and was first elected to the Legislative Assembly in 2008. Having served as Justice Minister for three years, Alison became the leader of Alberta’s Progressive Conservative Party and Premier of Alberta in October 2011.

Premier Redford became interested in politics at a young age and served as President of the PC Youth Association while still in high school.

She graduated from the University of Saskatchewan with a degree in Law and spent several years working for the Mulroney government, before turning to focus on human rights in the developing world.

While overseas, Premier Redford had the chance to work alongside Nelson Mandela after the fall of South Africa’s apartheid regime. She also helped the United Nations organize Afghanistan’s first-ever parliamentary elections in 2005.
She lives in Calgary with her husband Glen and her daughter Sarah.

Premier Redford lead a government that was elected to build Alberta, while living within its means and opening new markets across Canada and around the world, to ensure Albertans get the fairest price possible for their resources.